Connecting with families of braveheart soldiers in solidarity & support

Members of MAGMT bond with other families of martyrs with the aim to share, care and support one another. Travelling to different parts of India, we have met with families of braveheart soldiers who made the supreme sacrifice for the nation. These meetings make grieving families feel they are not alone and also needy families have be supported through linkages with kind individuals and organisations.

Along with visiting families of martyrs, MAGMT is happy to have made monetary contributions to Veer Nari’s, parents & children of martyred soldiers for health needs, medical treatment, home repair and marriage of daughters.

Taking the initiative followed by sustained efforts by MAGMT ensured that the family of braveheart Sepoy A Muniappan who was martyred in 1996, was allotted BDA housing site in Nadapraprabhu Kempegowda layout by Hon CM of Karnataka. As his widow Veer Nari M Devi was terminally ill with cancer, the site was registered in the names of their children Vanitha and Vinod. We thank Shri Rajeev Chandrashekar MP for support to this very important entitlement given after a delay of 24 years. Veer Nari Asha Thimmaiah was referred for employment to Cropnosys and was appointed as Accounts Officer. Veer Beti Vanitha Gadaily was supported for Football Coach training. Many children of martyred soldiers were given laptops for online classes.

Gifting all weather school bags to children of martyred soldiers studying in residential school in Ladakh was very satisfying. Many children slept hugging their bags. Their smiles of joy made the effort worthwhile. Thank you to all who helped make this happen. Former POW and army porter of 1962 War Mr Tseten Namgyal now aged 85 needed support of cot, mattress, blankets, solar light, warm clothing and rations for the winter months. He lives in a very remote village beyond Chushul along LAC with China. Linkages were made with Indian Army after request from India Cares and all material was delivered through collaborative efforts. 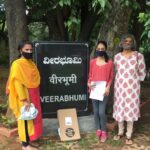 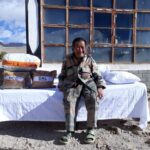 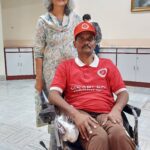 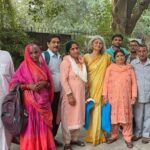