Major Akshay Girish was born on 6th December 1985 in Bangalore. From an early age, he was determined to join the Armed Forces and paved his way to Rashtriya Military School,111 NDA Course and Indian Military Academy. Akshay was commissioned into 51 Engineers of the Bengal Sappers on 10th December 2007, a third-generation officer from the family, following his war veteran grandfather Col AK Moorthy (Garhwal Rifles) and father Wg. Cdr Girish Kumar (retired Fighter Pilot).

In just under nine years of service he served in insurgency affected Nagaland, at the Line of Control between India-Pakistan in the mountains of Kupwara, Kashmir and along the India-China border in the treacherous high-altitudes of Sikkim. He volunteered for difficult tasks and shouldered responsibility at every level with great motivation and professionalism. He went beyond the call of duty, to rescue and rush to hospital many local Kashmiris severely injured in a road accident. He was awarded the Army Commanders Commendation in 2010. 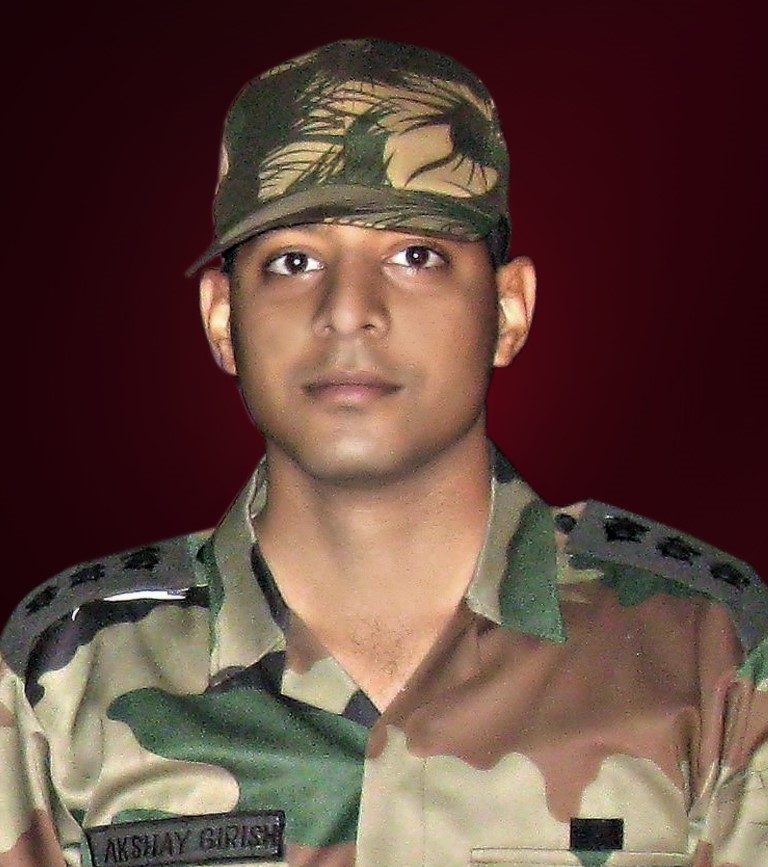 Akshay got his degree in Electrical Engineering from CME Pune in 2013. He proved his competence in assignments and courses, getting ‘A’ grade in Young Officers Course and Instructors grading (BI) in Junior Command Course. Known as a soldier’s soldier, he was respected and loved by juniors and seniors. A role model, with unwavering integrity and courage, he wore his olive-green uniform with pride and honour at all times.

On the fateful dawn of 29th November 2016, when terrorists attacked a neighboring Artillery unit and killed four soldiers before entering two residential buildings in Nagrota, Akshay was chosen to lead his unit’s Quick Response Team (QRT). The terrorists had trapped women, children and unarmed men inside two residential buildings. Akshay swiftly deployed his team to pin down the terrorists and displayed exemplary leadership and courage in the dangerously violent gunfight that ensued. Unmindful of his own safety, he moved in alone to enter the building to rescue trapped families and engaged the hidden terrorist leader in a fierce gunfight at close range.  Hit by multiple bullets, Akshay made the supreme sacrifice when a grenade was directly lobbed at him. Three terrorists were killed and all trapped people were saved by valour and supreme sacrifice.

Akshay was not only a true patriot and a much-loved officer but also a wonderful son, brother, husband, father and friend, along with being a very good poet, tennis player, foodie and painter. The Trust is here to take forward his inspiring legacy through young Indians who are determined to do their best for the motherland.

To know more, to collaborate or to participate in the activities of Major Akshay Girish Memorial Trust, please contact us at: